Do Not DPF Delete
Home DEF What Year Did Chevy Start Using DEF and Why? Short Answer: Chevy started using DEF in 2010 in response to EPA 2010 regulations. DEF usage in Chevrolet vehicles is very important for the SCR (selective catalytic reduction) process to work. SRC is the process used by Chevrolet and other manufacturers to reduce emissions.

Chevrolet began using DEF in response to the new 2010 guidelines by the EPA. DEF usage in Chevrolet vehicles is necessary for the SCR (selective catalytic reduction) process which is the main strategy used by Chevy and other manufacturers to reduce emissions from their vehicles.

DEF stands for Diesel Exhaust Fluid and it is a non-hazardous solution that is sprayed into the exhaust of diesel vehicles. The purpose of DEF is to neutralize dangerous emissions and reduce them to nitrogen and water. This transition will render the emissions harmless. This process was designed to help eliminate harmful emissions into our environment and increase the health of our air. So this article is about answering the question what year did Chevy start using DEF and why they chose to do so.

In 2010, new emissions regulations took effect that were put in place by the Environmental Protection Agency. These regulations cracked down on diesel emission standards and reduced discharges of particulate matter and nitrogen oxide in an attempt to eliminate them from diesel engines.

The reason that diesel engines emit particulate matter is because incomplete combustions of fuel in diesel engines create that matter. The nitrogen oxide is created whenever fuel is burned at a very high temperature. To meet these new regulations, engine manufacturers are trying a number of different strategies.

Engine modifications are being designed to create clean combustion and add EGA devices.

EGAs remove the pollutants following the exit from the engine’s combustion chamber. To meet the specifications of the new regulations, people have switched to ULSD instead of regular diesel fuel.

ULSD stands for ultra-low sulfur diesel and burns cleaner and produces less particulate in all types of engines. This includes old engines as well as newer ones. Compared to regular diesel fuel, ULSD emits only 15 parts per million of sulfur, which is 97% lower.

As you can probably deduce, DEF is one of the strategies that automakers came up with to help meet the 2010 emission regulations. Today, many trucks require DEF. DEF is a solution that is 32.5% urea and 67.5% deionized water. DEF is used in the process of selective catalytic reduction with the ultimate goal being to lower the emissions of nitrogen oxide by diesel engines.

This is accomplished by injecting the DEF into the exhaust stream to neutralize particulate and nitrogen oxide. DEF is non-toxic, and helps to clean omissions. 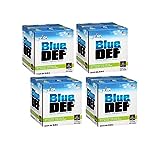 DEF is a fluid that is injected into the exhaust stream of diesel engines in order to reduce the emits created by the combustion of the engine. Diesel exhaust fluid is used as part of the process of selective catalytic reduction, which is a process put in place by Chevrolet and other vehicle manufacturers to meet the 2010 emissions regulation guidelines.