If you are looking at ways to get some extra horsepower from your engine, de-restricting the exhaust system will probably be your first step.

For start, it is not very expensive when you compare it to other engine power upgrades.

And if you go for the cat-back system built specifically for your car make and model, it is quite simple to install, too.

In the end, wrap it all up with straight-through de-cat pipe instead of those restrictive catalytic converters.

You will surely have noticeable improvements.

The engine breathes easier, throttle response is quicker and car sounds much sportier.

This seems like a hot ticket for cheap and easy power gains! Yet, there are one or two drawbacks.

As catalytic converters have been around for a while, they have evolved in every way over past decades. However, they still present a flow restriction, especially at higher engine speeds when there is a large number of exhaust gases.

Luckily for all of you power-addicts, there is a solution in form of high flow catalytic converters.

It will help you unlock that extra kick without breaking the law, ozone-layer or your neighbors’ lungs.

So, what differs this high flow catalytic converters from factory-installed OEM ones? 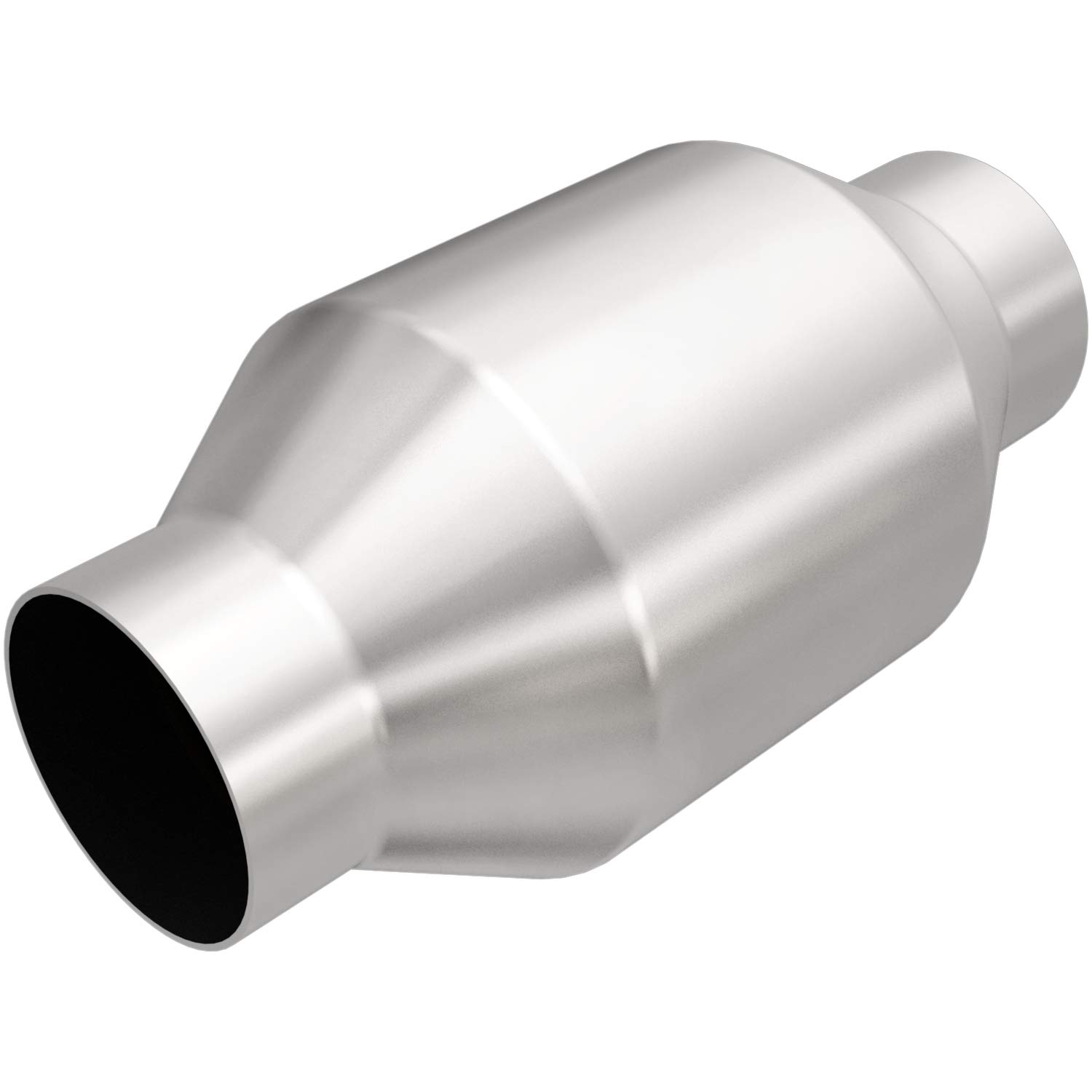 This universal spun catalytic converter from Magnaflow is a great choice for just about any car. A high flow metallic core makes it suitable for heavy-duty applications. So, if you have a tuned up engine or do a lot of towing, this will be a right choice for you. 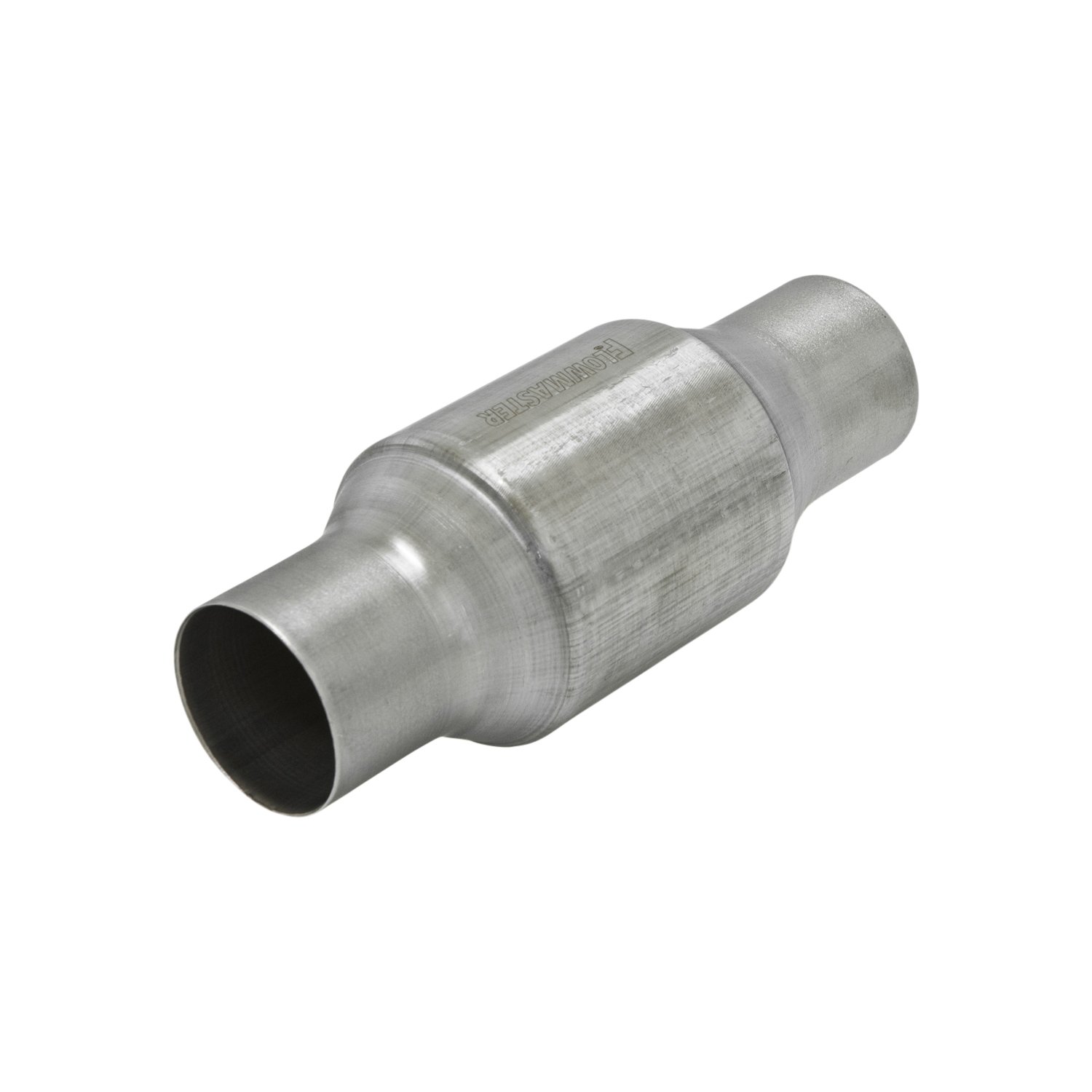 In most cases, performance and high-prices go hand in hand. But this is not the case with Flowmasters 223 series.

If you want to free up the exhaust on a stock engine, this will be your best choice.

Vibrant GESI HO-series is a perfect match for application in cars with highly modified engines.

It has a metallic core that can endure extreme exhaust temperatures while keeping the high gas flow.

The higher price is easily justified for use in high-performance cars, as this is the only catalytic converter that can take up to 700 hp.

For start, let’s see how the catalytic converter works. Cut open any of them, and you will find a monolith honeycomb-like mesh inside, called catalyst support or substrate.

It carries the catalyst – usually platinum, palladium or rhodium.

They trigger a redox reaction that converts pollutants and toxic gases into less harmful ones.

Factory installed catalytic converters OEM usually have a dense ceramic core. This means that catalyst has a large contact area to achieve a reduction reaction.

Although this is excellent for emission reduction, it also affects the gas flow.

Now, take a look inside the high flow catalytic converter, and you will notice that it’s honeycomb core is not as dense as OEM one.

This density is represented by ‘cell per inch’ or CPI. By lowering the cell count there is a less cross section which obstructs the exhaust gas flow.

However, as this cuts down the overall catalytic converter surface, emission reduction ability will drop.

There are two different types of high flow catalytic converters:

One more thing you should have in mind before you decide. As already stated, lowering cell count improves the gas flow, but sacrifices emission reduction.

So, how low can you go with a cell count and still have a road legal exhaust?

Although this can vary from car to car, in general, less than 200 CPI cannot offer enough emission reduction. For optimum balance, go for 300-400 CPI units.

Start looking for a catalytic converter that is best suited for your car, and you will come across with terms like ‘EPA’ or ‘CARB compliant’.

What does all this mean? EPA stands for Environmental Protection Agency, while CARB is a short for California Air Resources Board.

In order to be legally sold in the United States, every aftermarket catalytic converter has to pass a series of tests.

This is done to prove it’s the ability to convert a certain amount of pollutants over a course of time. CARB compliant catalytic converters have to meet higher emission standards than EPA compliant ones.

So, how this affects you? If you live in California, you will have to get an aftermarket catalytic converter that is CARB compliant.

For the rest of the 49 states, EPA compliant converter will do the trick. Although the State of New York has adopted CARB standards, it still allows EPA aftermarket catalytic converter.

With all of this said, it is obvious that modern high-flow catalytic converters don’t impose any kind of exhaust restriction.

This means that you can have a tuned-up performance car that is still environment friendly. And, as some of them are not too expensive either, your wallet will be happy as well.

So, there is no more excuse for driving around with an untreated exhaust. Let’s see what kind of high flow catalytic converters are available.